Over the past few years, and especially during the Covid crisis, many images that we receive come from the Loch Ness Webcam. For reasons outwith the control of the camera operators, the resolution of some of the images from the camera has at times been less than ideal. As such, it has been more difficult to identify what some images submitted. Given they are still 'unexplained' though, we decided that from 2021 onwards, such images would be listed separately from those that are reported by people who saw something while physically at the loch. This we feel more properly gives 21st Century tech it's place in the history of Loch Ness.

19 Octobe 2021 Veteran webcam watcher Eoin Fagan recorded a black object high out of the water moving down the Loch, on the northern side. As it moved down it went lower in the water on approach of a cruiser moving north, in its direction. By the time the cruiser became in view on the screen, the mysterious object submerged totally in the water, but still must have been touching the water, from underneath as it was leaving a straight line wake on the water, towards the oncoming cruiser.  By the time the cruiser got to where the last position of the disturbance on the water , the object was completely gone.  The object had to be a couple of feet or more out of the water when first sighted, especially to see it from that distance. The recording captures the moment of the object submerging perfectly. You can see the footage on Eoin's Youtube Channel

6 September 2021 - Weiming.Jiang, watching from China, took the image below just after half past ten local time. She said that at first there was only one black dot, and then two black dots appeared, very close to the shore. The dots moved on the water for six minutes. 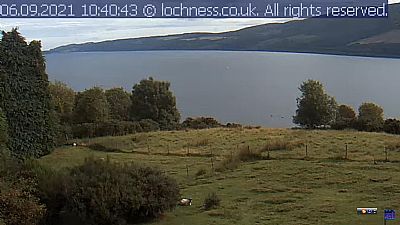 22 August 2021 - veteran webcam watcher Eoin O'Fagan reported watching the webcam at 10.51 in the  morning and seeing 2 solid black shapes that headed across the screen then completely disappeared. He said it began over to the right of the screen and heaeded towards a stationary boat on the left of the screen A  small motor boat went through close to the shoreline a few minutes earlier and went by the stationary boat, shore side. He took this still image 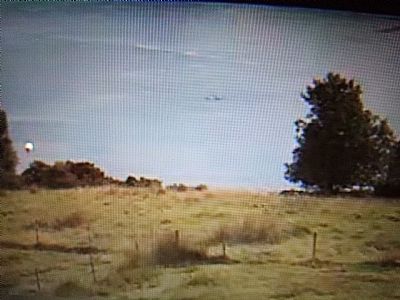 11 August - Matt Reddick, watching online from Dallas, Texas caught an unidentified moving image on the water via the Nessie on the Net! webcam.

He explained: "At 3:56:00 or just before, between the clearing in the trees just above the shore in the middle of the frame, something surfaces. It appears to surface and dive leaving wakes as it swims left. When I applied filters, I could see something else a ways to the left that I missed in original at the beginning of the sighting" In addition, at approximately 4:04:15, a boat is crossing from left to right. Something else surfaces well behind in its wake and seems to chase or catch up to it. You can view his video on youtube

26 March - Roslyn Casey from Leeds was watching the webcam at 17.46 and captured the image below. LIke many, although she has in the past visited the loch, Roslyn has been carrying out the search via the web since the beginning of lockdown and the travel restrictions that have been in place in the UK

17 March - Kalynn Wangle caught another glimpse of something unknown at the loch - she explained "On March 17th at 16:15 a very large dark shape appears to be swimming from left to right at the very front of the shore. It seems to be making a wave for a bit, and either surfaces for a second or is just under the surface.  At 16:17 it goes behind the tree on the right, and doesn't pop back up".

A video of what Kalynn captured online is on YouTube

12 March 2021 - Eoin O'Fagan caught sight of something unexplained on the webcam. He said:

"I captured some footage off the webcam at 17.08 today, 12/03/21. There was disturbance of water and a wake is also visible with a black shape is seen rising up and down, as it moves slowly across the screen and disappears under the letter h of the same word.

2 smaller black shapes appeared, close together and I caught this odd looking image on a screenshot (below).I did not see any boats, at the time of sighting. There seemed to be a lot of action on the water around the object even though it moved slowly."

22 January 2021 - again Eoin O'Fagan caught sight of something unexplained on the webcam - it was very similar to the 19 January sighting. He explained:

"I just went into the webcam at 2.11 pm and immediately saw what I could make out was 2 objects splashing around in the bay about 100 feet apart.They were 2 black objects throwing up a lot of water, and from the distance were large looking in the water. Then the one on the right submerged, and then came up again.The one on the left did the same thing intermittently. They were visible for up to 3 minutes, and then there was nothing.They could have been a couple of feet out of the water and maybe a dozen feet long."

This is a still of what he saw: 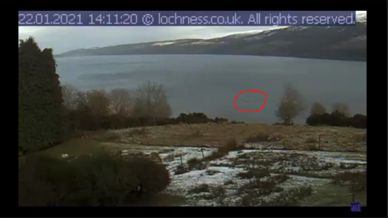 4 mins after viewing the sighting he also briefly spotted a black shape a few hundred yards  further up the loch from the area of interest and took a screenshot of this image. The result is shown below: 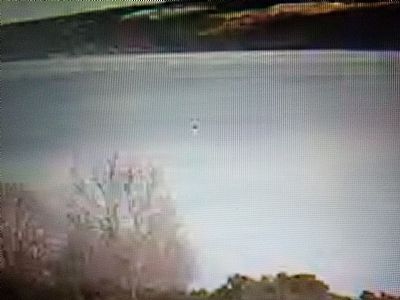 19 January 2021 - long time Nessie watcher Eoin O'Fagan caught sight of something unexplained on the webcam at 2.20pm local time. He said that it was visible for about 20 minutes but he managed to get a recording of it for 3 and a half minutes. He also explained that it was coming in and out of view for 20 minutes and watched the webcam till dark confirming that there was definitely no boat traffic in the area. This is a still of what he captured: 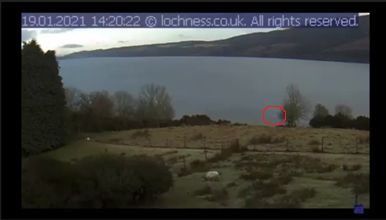 11 January 2021 - at 11.42am, regular webcam watcher Kalynn Wangle  noticed a "V" shaped wake close to the left front side of the loch shore while watching the cam, and less than 10 seconds later, she saw something black surface for only about a second before it disappeared. She watched the footage a few times, and reported it as looking like black object is swimming out from behind the tree that cover the view of the shore. You can see more at https://youtu.be/n--ByFl_Gpo