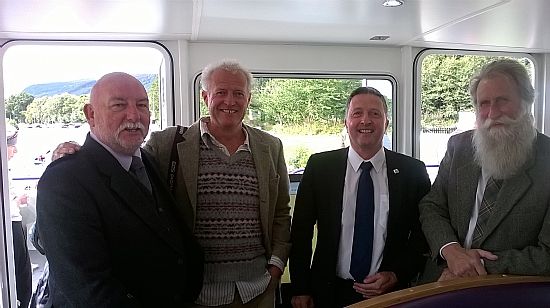 Pictured above are from L to R, Willie Cameron, Steve Feltham, Gary Campbell, Adrian Shine. This was taken at the launch of the Jacobite Rebel cruise boat on the loch in August 2015. It's said that getting four Nessie experts togther is a rarer sight than the monster herself.........

Below is a list of brave souls who have dedicated large parts of their lives to searching for monsters at Loch Ness and elsewhere. We've kept this list to those who are still active today - if we've missed some, please let us know. If you want to know more about what they do, it's best just to google or bing them. As they all bring something special to the story, for fairness we've listed them in alphabetical order by surname.....

George Edwards - skipper, spotter and self confessed faker, discovered the deepest part of the loch in 1990s

Steve Feltham - longest vigil on record and Nessie expert. Runs Nessie-sery Research from Dores by the loch and was voted Highland Tourism Ambassador of the Year in 2016 after spending 25 years at the loch

Gordon Holmes - has conducted the most recent searches for Nessie

William Jobes - A regular visitor ot the Loch and one time member of the Loch Ness Investigation Bureau, William continues the search and has reported two sightings - one in 2011 and one in 2015, both with picture evidence

John Kirk - Canadian cryptozoologist and author and founder of the bcscc